The FFPL 2021 Winter league stage has come to an end! Finally, we have the twelve finalists who will compete on January 30, 2022. The final two days of the league stage were really exciting. There were some incredible comebacks, some heartbreaking stories, and plenty of jaw-dropping moments. This recap is for those of you who missed the action!

Chemin Esports has been on top of the scoreboard for the most part from the beginning of the event. TSM knocked them off their perch for a day, but they quickly reclaimed their position. Revenant Esports, on the other side, had concluded their league stage run significantly later than Chemin Esports due to their placement in the group. Revenant Esports had only played 18 matches but had 215 points at the conclusion of Day 5, whilst Chemin Esports had completed 24 games but only had 251 points, an easy aim for Revenant Esports to meet. They were able to get more points from kill points. They had the most kills in the competition, with 117! 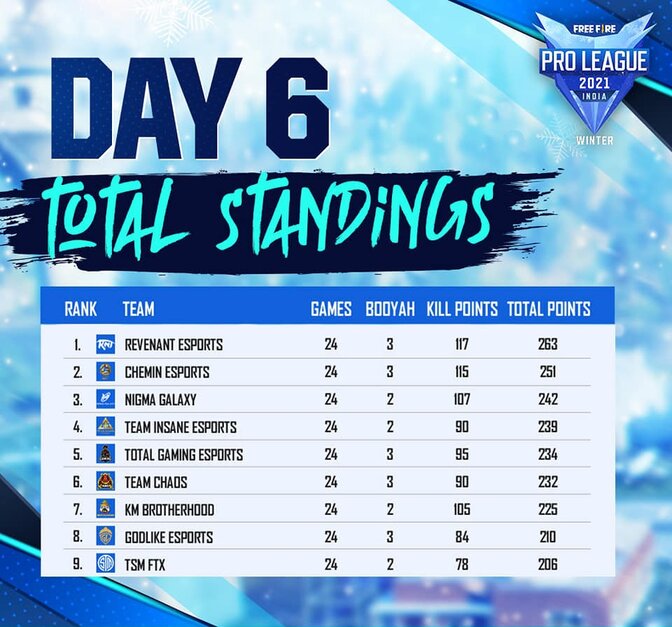 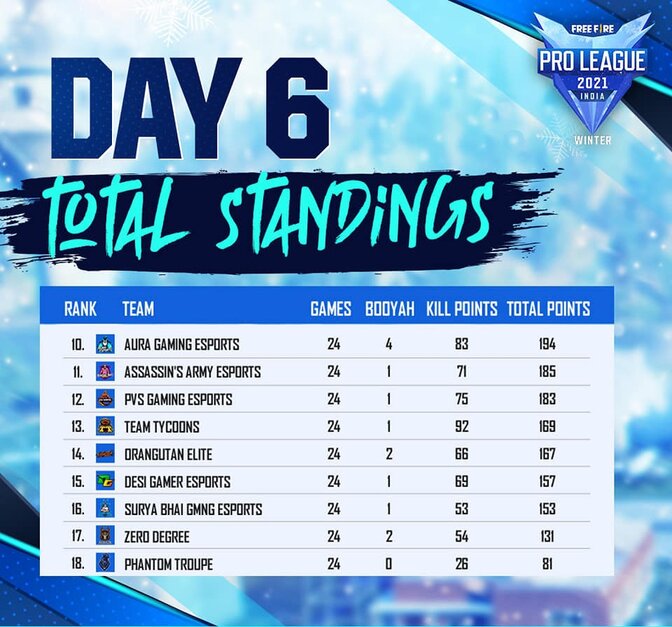 On multiple times, KM Brotherhood has enjoyed brief moments of triumph in the tournament’s top three. KMBH-Dipu, their top player, had the best Week 1 performance, while KMBH-Aiz3n had the greatest Week 2 performance. However, while they may be statistically the finest, that isn’t even the best thing about them. KMBH-Dipu has already grabbed himself a highlight reel that might possibly be one of the top clutches of the year in his very first elite event. In Match 5 of Day 5, KMBH-Dipu pulled off a 1 against 3 clutch against Desi Gamers. He forced them to run in circles around and beneath the bridge that joins the mainland to Purgatory’s southern island.

Some of the finest teams in the country include Orangutan Elite and Desi Gamers Esports. In fact, they represented India at the Free Fire Asia Championship on an international level. Unfortunately, these teams did not even make it to the Free Fire Pro League 2021 Winter grand finals. During the second and third weeks of the competition, Orangutan Elite suffered some awful games and horrible luck. In numerous games, they were eliminated quite early. Even though they made a little recovery on Day 5, their momentum was snatched from them.

As we already mentioned that the grand finals is schedule for 30th January 6:00 PM.

After the winner announcement of Free Fire Pro League the Redeem codes will appear in live stream or in this website, also there was 2 chances to get this rewards in your vault, 1st is directly from in game or 2nd through redeem code; so if redeem code will share by offically then we will notify you as soon as the code is publish.

To get instant notification about the Redeem Code or other event details Subscribe to notification, this is totally free and install app for better experience.